Time To Say Goodbye To Nikon

Goodbye to Nikon – but potentially not forever….

A Nikon D5100 has been the number one camera in my photographic arsenal since late 2012 – and it has been a really fun and competent camera to use, capable, under the right conditions and operator (i.e. me) set-up, of producing fantastic results.

However, since upgrading to a micro four-thirds Panasonic Lumix G95 in August last year, it was time to find a new home for the D5100 rather than have it wasting away, forgotten, in a cupboard.

It took a while to relocate the Nikon, but it finally packed its bags and left home a couple of days ago and ended up in the hands of a loving new owner.

So for this story I thought I’d search back through my archives and find a few photographs captured on the Nikon D5100 to share with you.

I’d like to say that the photos here are a random selection, but clearly they are not. Maybe I should refer to them as a curated collection of images!

Here we go then – with a brief sub-story attached to each image based on my recollection of when I captured the image, and what I subsequently did with it in terms of post-processing.

Many people believe that the town of Bluff is the southernmost point of the South Island. In fact – it is not.

Slope Point in the Catlins holds that honour.

This photograph was captured in February 2013 – not long after I first got my Nikon D5100.

The photograph was processed first in DxO Photolab 4 then finished in Nik Color Efex Pro.

Another of my early photos from 2013 – a second hand store in Bluff.

Again processed in Color Efex Pro, this time, if I remember correctly, using the Kodachrome 64 preset with a few tweaks to give it a bit of a retro look.

This abstract photo above was taken much closer to home – over the road in the childrens’ playground in Queens Park.

This photo was straight out of Dxo Photolab 4 after being straightened and cropped for symmetry.

Port Chalmers Cemetery is home to many descendants of the early migrant ships that brought new settlers to Otago.

The cemetery rings with the noises rising up from the port itself and also offers commanding views up Otago Harbour toward Aramoana and Taiaroa Head.

Another one from Nik Color Efex Pro.

Every year – Covid, or lack of Covid, allowing – the Edendale Vintage Machinery Club hosts their Crank Up Day at Edendale a half-hour’s drive from Invercargill.

Crank Up is a weekend of entertainment for city and rural folk alike.

From the 2018 Crank Up this image, I felt, was deserving of a retro, almost analogue film, look so was processed accordingly in Nik Color Efex Pro.

If you have been to Ophir in Central Otago you would have seen, if not crossed, the Daniel O’Connell Suspension Bridge built in the late 1870s to take road traffic over the Manuherika River.

Deserving of a truly vintage appearance, this photo was finished in Silver Efex Pro using the – yes – vintage preset.

A rather stern looking gentleman and his lady companion in a vintage car in the 2020 Invercargill Christmas Parade.

This photo is a JPEG, straight out of camera, but with a bit of a vignette added,

The caption for this photograph says it all. The Esplanade in St Clair Dunedin always attracts a lot of people in fine weather, so I was lucky to be able to capture this image without anyone encroaching into the frame.

This was processed in DxO Photolab, and cropped for the final presentation here.

This whitebaiter was caught while he was patiently waiting on a run of elusive whitebait in the Karamea River.

This image is quite heavily cropped, so unfortunately shows up the lack of sharpness in the original capture.

However a run through On1 Photo Raw has given it a bit of new life and made it more presentable than otherwise would be the case.

A workman should never blame his tools for poor results, but I have to say that I have often struggled getting focus correct, and I blame this on the glasses I wear!

Just one photograph to go now in this little collection…

I “discovered” this old seed drill while on a bike ride back in November 2014.

This image was finished off with just a wee bit of I-hope-not-over-the-top HDR treatment using Nik HDR Efex Pro.

And as a parting shot…..

At the very top of this story is an image of the facade of an old building here in Invercargill.

Some of you may have seen this, or a similar, photo posted by me before, but if you haven’t seen it, by way of explanation this is the frontage of the old David Strang Coffee building tucked away behind some of H & J Smith’s buildings on Esk Street.

The importance of this building is that this is where instant coffee was invented, patented and introduced to the world back in 1890 by David Strang of Invercargill. 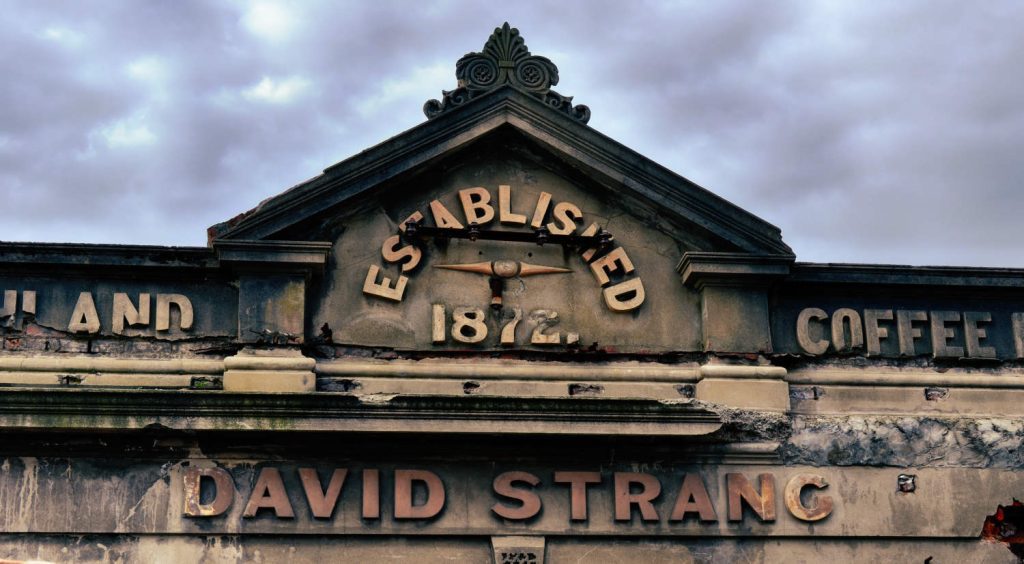 I hope you have enjoyed these photographs. If you have, please feel free to comment on and/or share this story with others.