In his book, Black & White Photography renowned photographer Michael Freeman says one of the appeals of black and white is that it transcends reality and offers “an alternative visual world, and in a way, a surreal one because everything in that world is seen differently from the way in which we experience it”, i.e. we experience the world around us in colour.

I guess a statement like that puts a lie to the old adage the camera never lies…when as photographers, we all know it can be made to, especially with modern post-processing techniques.

If you’ve been to my photoblog before you may have read that I still shoot film occasionally. That’s a bit of a fib because on looking back through my archives I last shot a roll of film in late 2018. Back then I had built up a small collection of 35mm cameras, mostly manual cameras, and most of which I had brought back from the dead by repairing them.

My collection included a Zenit E, Nikon F75, Canon EOS1000F, Yashica SLR, a Nikkormat FT2 and two Olympus Trip 35s. Take a look at a few photographs from some of these cameras in my Analogue Gallery.

Today just the Canon EOS1000F remains, and which, after a pang of conscience for not having shot film for quite some time, I dug out of the cupboard and dusted off. With a new battery inserted – voila! – all functions seem to be working as expected.

So yesterday I purchased some film….and in the next day or two, I’ll be out shooting film again…this time black and white on Ilford HP5 Plus 400.

In the meantime, enjoy these black and white images shot with an Olympus Trip 35 on Lomography Earl Grey film when we were in Turkey in 2018.

All images were captured using a refurbished Olympus Trip 35, on Lomography Earl Grey BW 100ASA film. The film was processed at a local (now closed) photolab, and scanned at home with an Epson V370 scanner.

See all the images from this story in a lightbox slideshow: 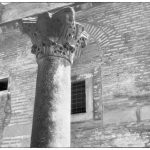